Raft or not? The Best Solution to Data Consistency in Cloud-native Databases 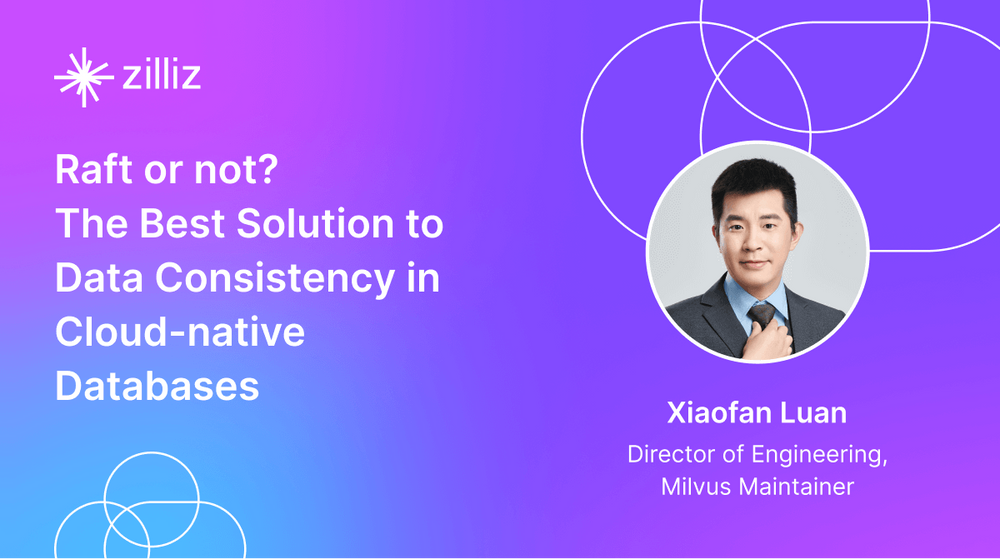 Consensus-based replication is a widely-adopted strategy in many cloud-native, distributed databases. However, it has certain shortcomings and is definitely not the silver bullet.

This post aims to first explain the concepts of replication, consistency, and consensus in a cloud-native and distributed database, then clarify why consensus-based algorithms like Paxos and Raft are not the silver bullet, and finally propose a solution to consensus-based replication.

Before going deep into the pros and cons of Paxos and Raft, and proposing a best suited log replication strategy, we need to first demystify concepts of replication, consistency, and consensus.

Note that this article mainly focuses on the synchronization of incremental data/log. Therefore, when talking about data/log replication, only replicating incremental data, not historical data, is referred to.

Replication is the process of making multiple copies of data and storing them in different disks, processes, machines, clusters, etc, for the purpose of increasing data reliability and accelerating data queries. Since in replication, data are copied and stored at multiple locations, data are more reliable in the face of recovering from disk failures, physical machine failures, or cluster errors. In addition, multiple replicas of data can boost the performance of a distributed database by greatly speeding up queries.

In short, consistency in a distributed database refers to the property that ensures every node or replica has the same view of data when writing or reading data at a given time. For a full list of consistency levels, read the doc here.

The essence of linearizability is to guarantee the recency of multiple data replicas - once a new value is written or read, all subsequent reads can view the new value until the value is later overwritten. A distributed system providing linearizability can save users the trouble of keeping an eye on multiple replicas, and can guarantee the atomicity and order or each operation.

To put it simple, consensus is a general agreement on value. For instance, Steve and Frank wanted to grab something to eat. Steve suggested having sandwiches. Frank agreed to Steve’s suggestion and both of them are had sandwiches. They reached a consensus. More specifically, a value (sandwiches) proposed by one of them is agreed upon by both, and both of them take actions based on the value. Similarly, consensus in a distributed system means when a process propose a value, all the rest processes in the system agree on and act upon this value. 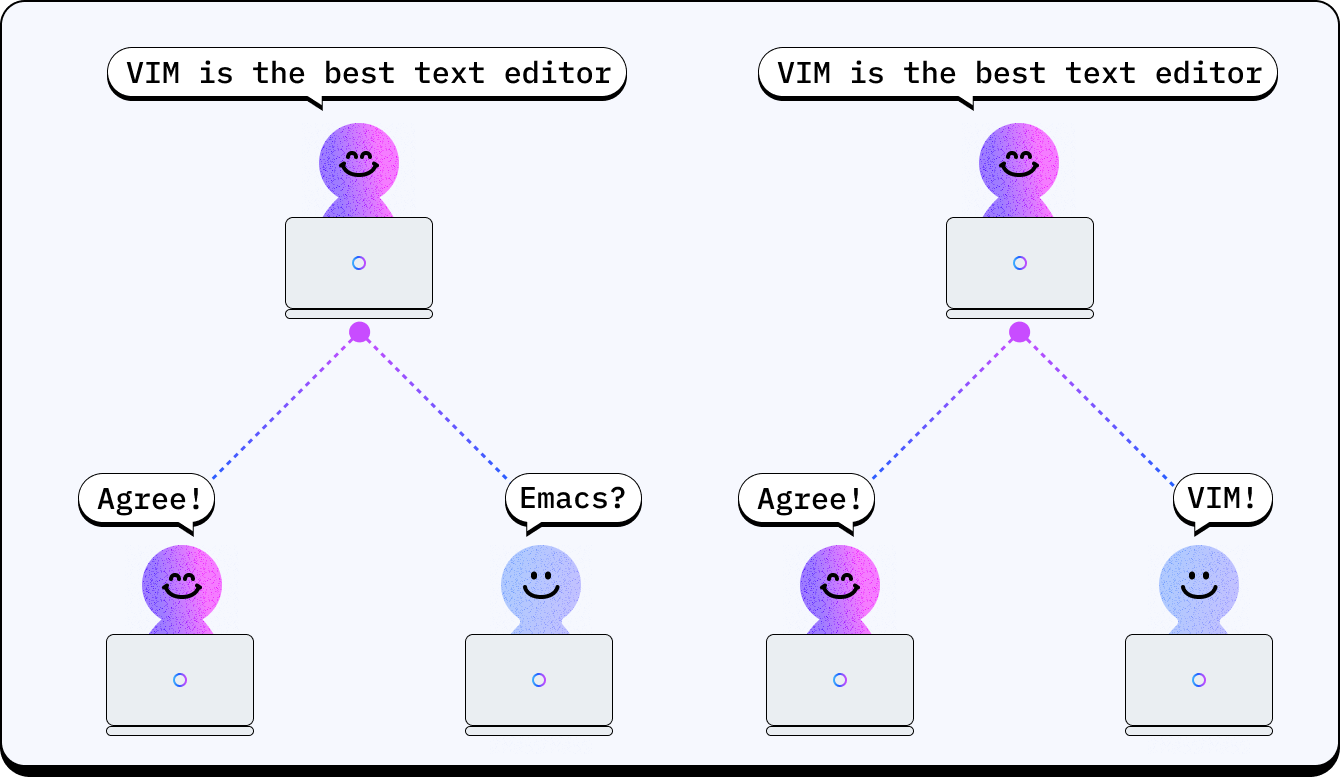 Consensus in a distributed system.

In recent years, we witness another prevalent consensus-based algorithm in the industry - Raft. It has been adopted by many mainstream NewSQL databases like CockroachDB, TiDB, OceanBase, etc.

When designing a database system, the commit order of logs and state machines should be taken into consideration. Extra caution is also needed to maintain the leader lease of Paxos or Raft and prevent a split-brain under network partition. 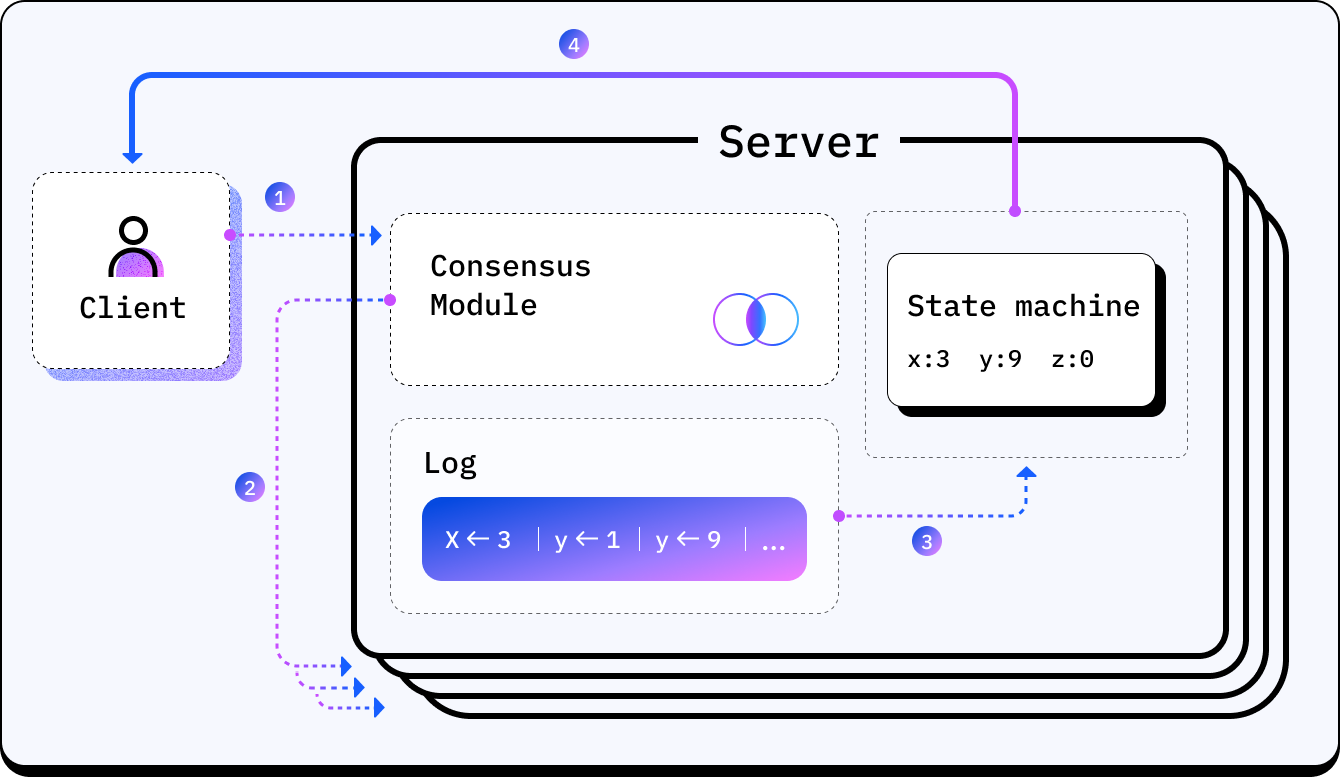 Indeed, Raft, ZAB, and quorum-based log protocol in Aurora are all Paxos variations. Consensus-based replication has the following advantages:

One misconception is that consensus-based replication is the silver bullet to achieving data consistency in a distributed database. However, this is not the truth. The challenges in availability, complexity, and performance faced by consensus-based algorithm blocks it from being the perfect solution.

For multi-datacenter and multi-cloud replication, the pursuit for consistency compromises not only availability but also latency, resulting in a decline in performance. Therefore, linearizability is not a must for multi-datacenter disaster tolerance in most of the applications.

A log replication strategy for cloud-native and distributed database

Undeniably, consensus-based algorithms like Raft and Paxos are still the mainstream algorithms adopted by many OLTP databases. However, by observing the examples of PacificA protocol, Socrates and Rockset, we can see the trend is shifting.

There are two major principles for a solution that can best serve a cloud-native, distributed database.

1. Replication as a service

A separate microservice dedicated to data synchronization is needed. The synchronization module and storage module should no longer be tightly coupled within the same process.

For instance, Socrates decouples storage, log, and computing. There is one dedicated log service (XLog service in the middle of the figure below). 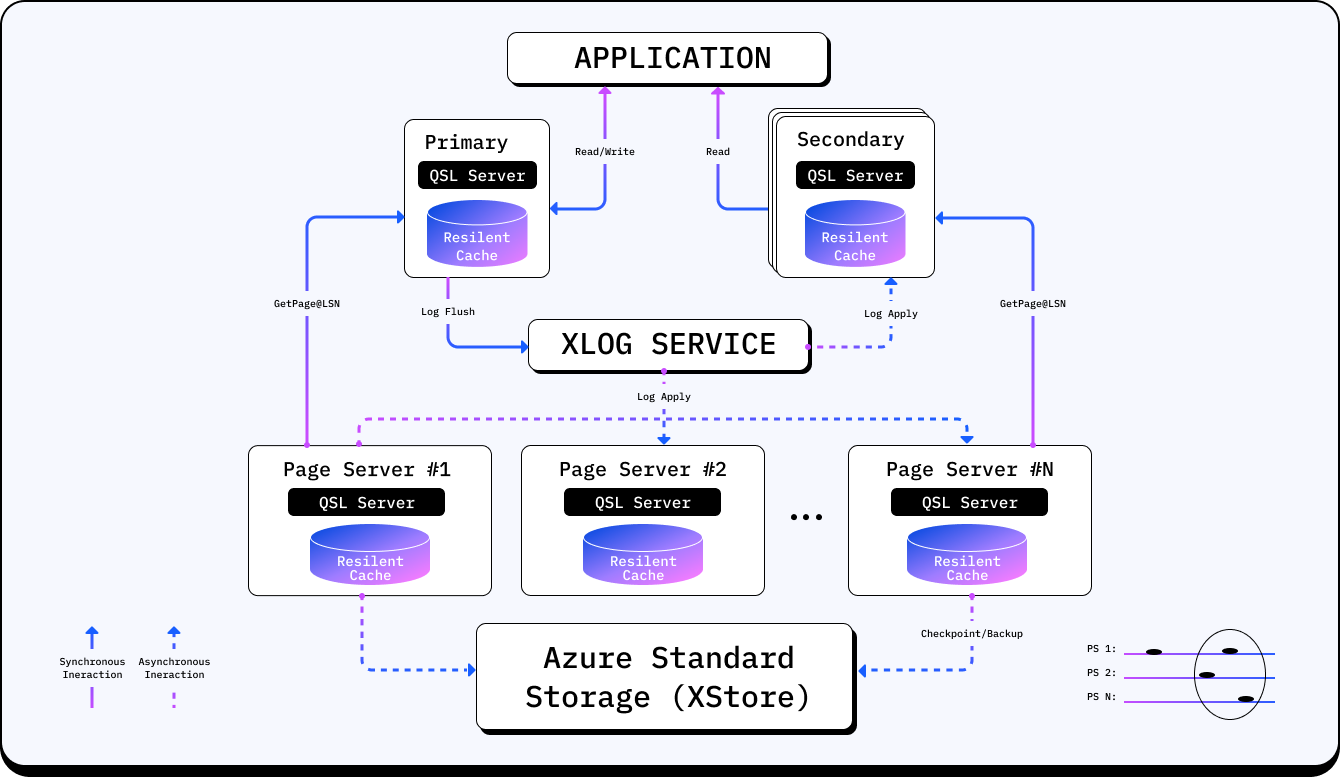 The architecture of Socrates.

XLog service is an individual service. Data persistence is achieved with the help of low-latency storage. The landing zone in Socrates is in charge of keeping three replicas at an accelerated speed. 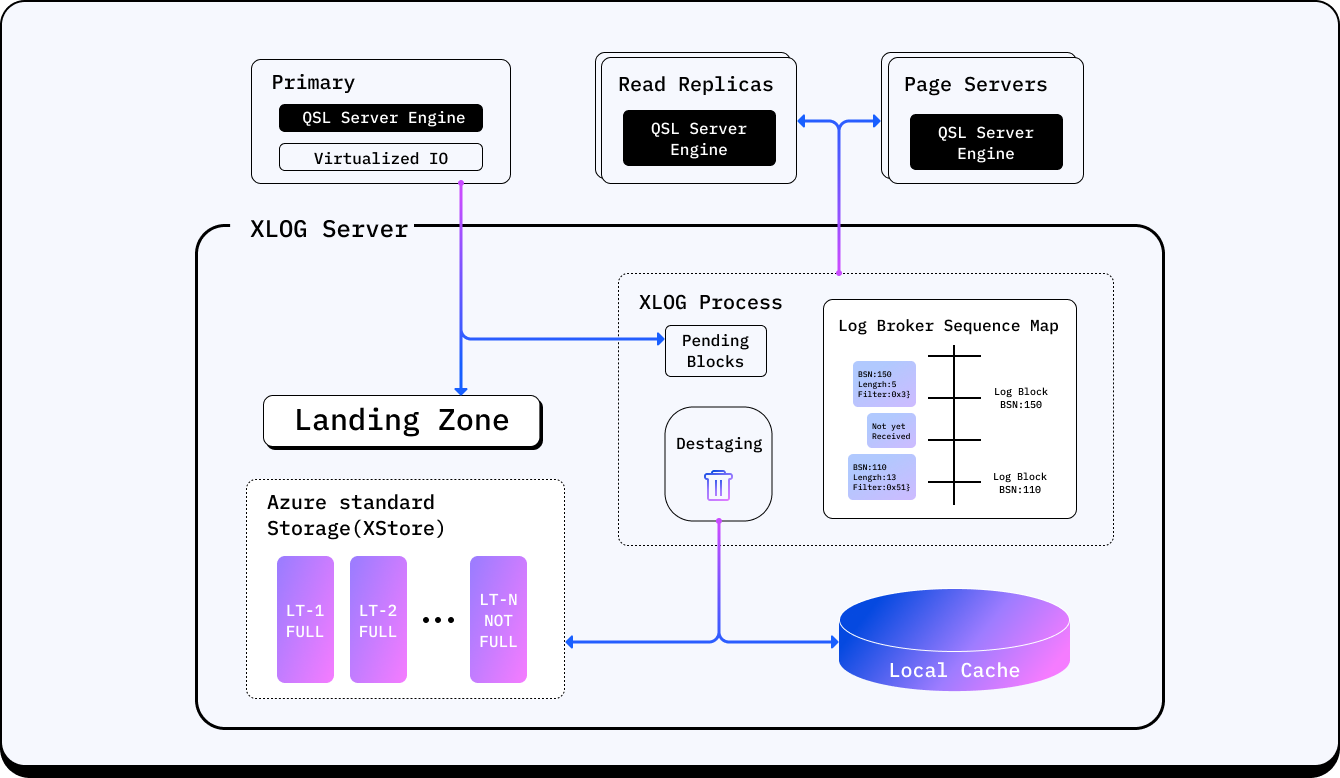 The leader node distributes logs to log broker asynchronously, and flushes data to Xstore. Local SSD cache can accelerate data read. Once data flush is successful, buffers in the landing zone can be cleaned. Obviously, all log data are divided into three layers - landing zone, local SSD, and XStore.

One way to design a system is to follow the Russian doll principle: each layer is complete and perfectly suited to what the layer does so that other layers may be built on-top or around it.

When designing a cloud-native database, we need to cleverly leverage other third-party services to reduce the complexity of system architecture.

It seems like we cannot get around with Paxos to avoid single point failure. However, we can still greatly simplify log replication by handing leader election over to Raft or Paxos services based on Chubby, Zk, and etcd. 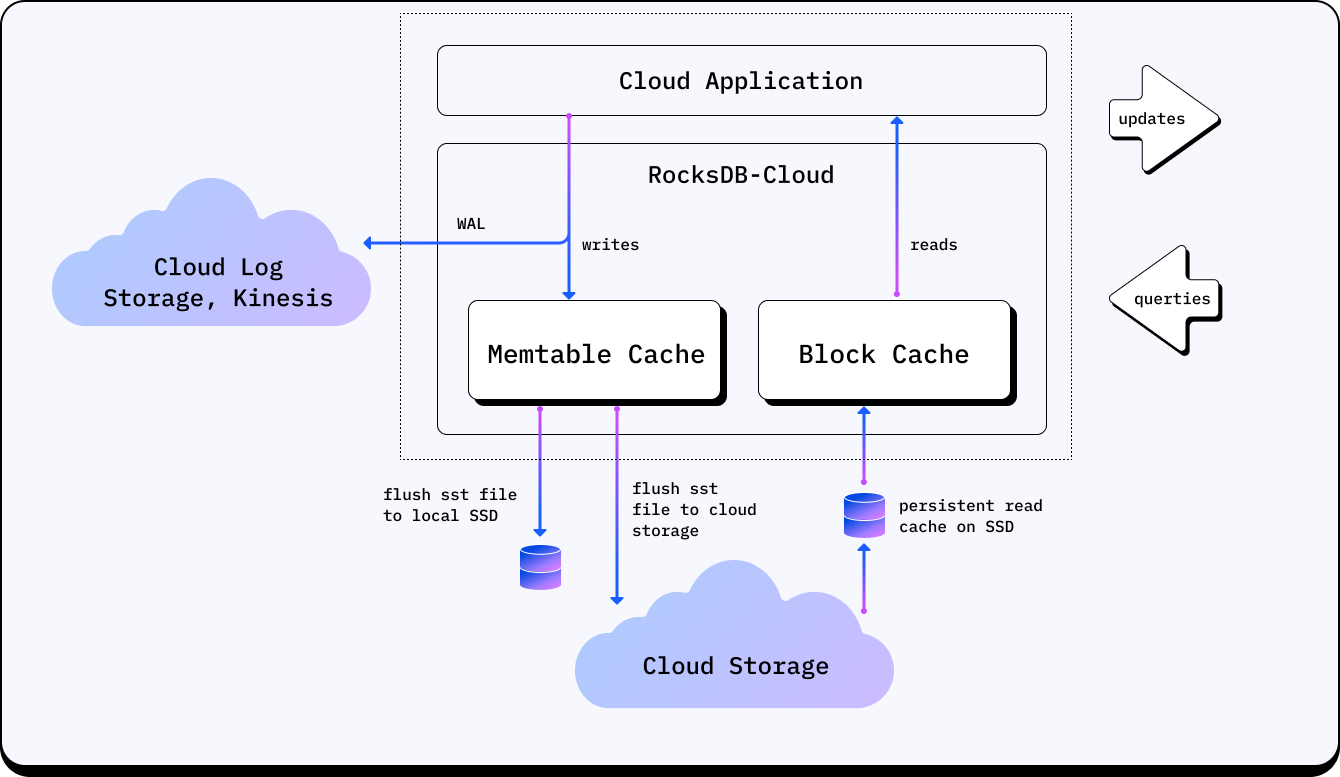 However, the design of Milvus did not adopt the follower strategy. In other words, Milvus does not inquire commit index every time it receives a query request. Instead, Milvus adopts a mechanism like the watermark in Flink, which notifies query node the location of commit index at a regular interval. The reason for such a mechanism is that Milvus users usually do not have high demand for data consistency, and they can accept a compromise in data visibility for better system performance.

In addition, Milvus also adopts multiple microservices and separates storage from computing. In the Milvus architecture, S3, MinIo, and Azure Blob are used for storage. 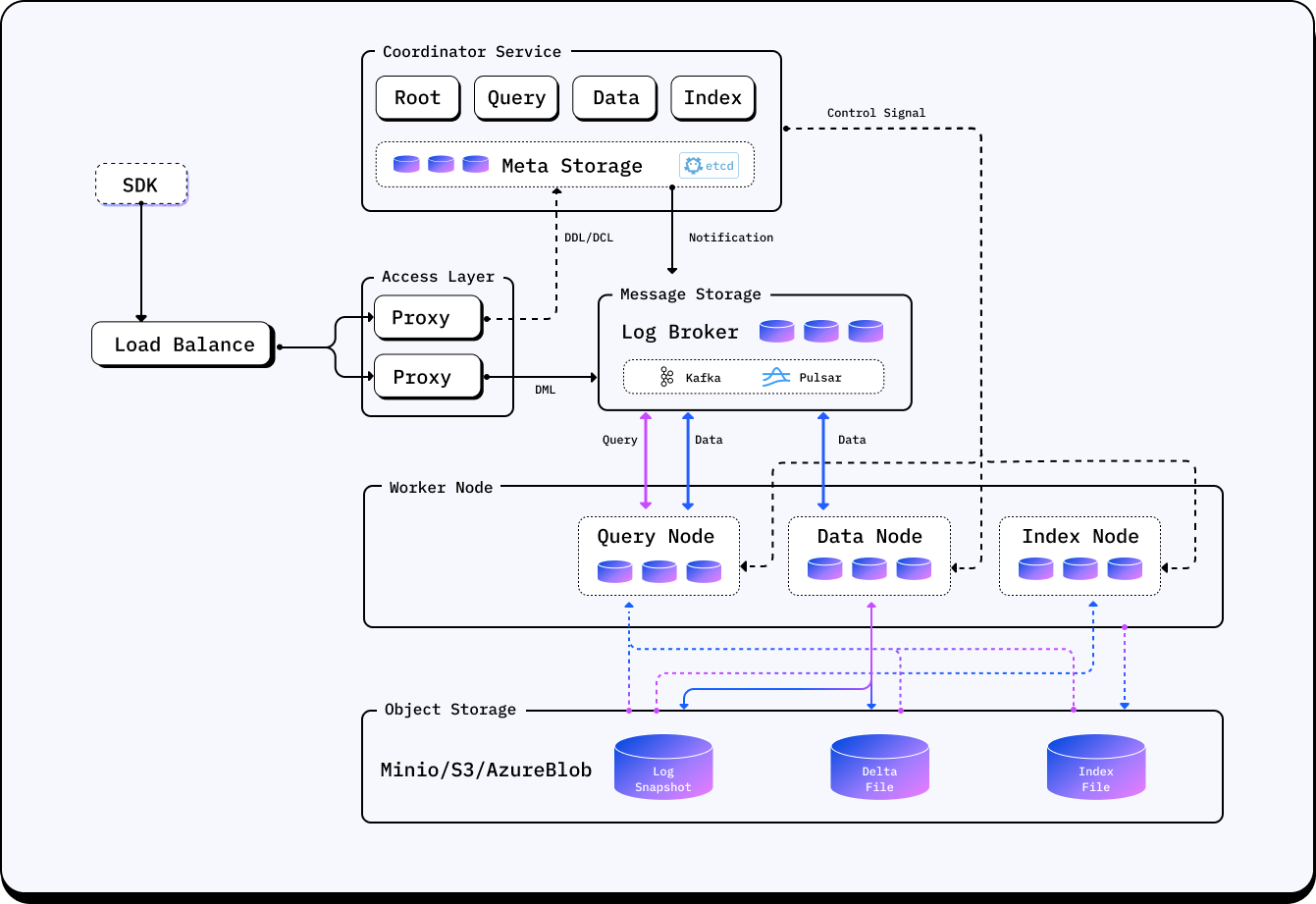 Nowadays, an increasing number of cloud-native databases are making log replication an individual service. By doing so, the cost of adding read-only replicas and heterogeneous replication can be reduced. Using multiple microservices enables quick utilization of mature cloud-based infrastructure, which is impossible for traditional databases. An individual log service can rely on consensus-based replication, but it can also follow the Russian doll strategy to adopt various consistency protocols together with Paxos or Raft to achieve linearizability.