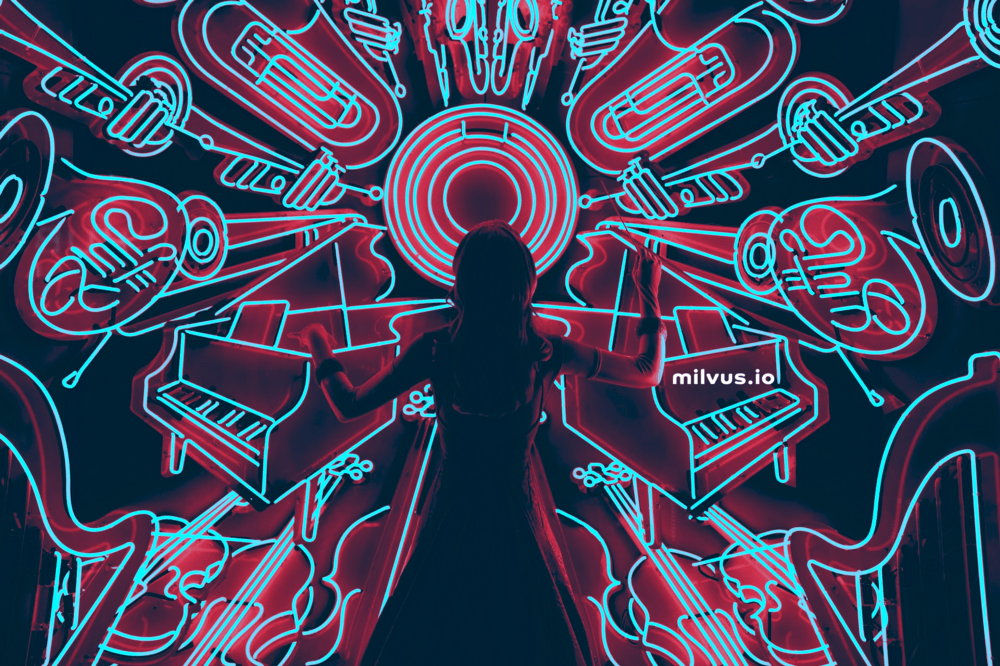 Wanyin App is an AI-based music sharing community with an intention to encourage music sharing and make music composition easier for music enthusiasts.

User-based CF may lead to prohibitively longer time for calculation when the user number passes a certain point. Taking the characteristics of our product into consideration, we decided to go with I2I CF to implement the music recommender system. Given that we do not possess much metadata about the songs, we have to deal with the songs per se, extracting feature vectors (embeddings) from them. Our approach is to convert these songs into mel-frequency cepstrum (MFC), design a convolutional neural network (CNN) to extract the songs’ feature embeddings, and then make music recommendations through embedding similarity search.

Now that we have feature vectors, the remaining issue is how to retrieve from the large volume of vectors the ones that are similar to the target vector. When it comes to embeddings search engine, we were weighing between Faiss and Milvus. I noticed Milvus when I was going through GitHub’s trending repositories in November, 2019. I took a look at the project and it appealed to me with its abstract APIs. (It was on v0.5.x by then and v0.10.2 by now.)

We prefer Milvus to Faiss. On the one hand, we have used Faiss before, and hence would like to try something new. One the other hand, compared to Milvus, Faiss is more of an underlying library, therefore not quite convenient to use. As we learned more about Milvus, we finally decided to adopt Milvus for its two main features:

In a nutshell, Milvus is very friendly to users and the documentation is quite detailed. If you come across any problem, you can usually find solutions in the documentation; otherwise, you can always get support from the Milvus community.

After deciding to use Milvus as the feature vector search engine, we configured a standalone node in a development (DEV) environment. It had been running well for a few days, so we planned to run tests in a factory acceptance test (FAT) environment. If a standalone node crashed in production, the entire service would become unavailable. Thus, we need to deploy a highly available search service.

Milvus provides both Mishards, a cluster sharding middleware, and Milvus-Helm for configuration. The process of deploying a Milvus cluster service is simple. We only need to update some parameters and pack them for deployment in Kubernetes. The diagram below from Milvus’ documentation shows how Mishards works: 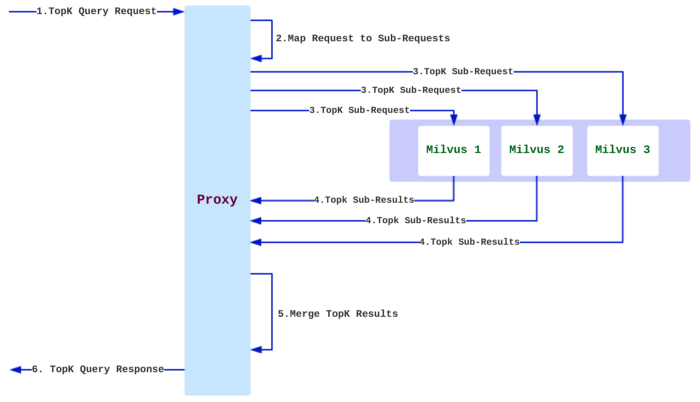 A diagram of Mishards' working mechanism.

Mishards cascades a request from upstream down to its sub-modules splitting the upstream request, and then collects and returns the results of the sub-services to upstream. The overall architecture of the Mishards-based cluster solution is shown below: 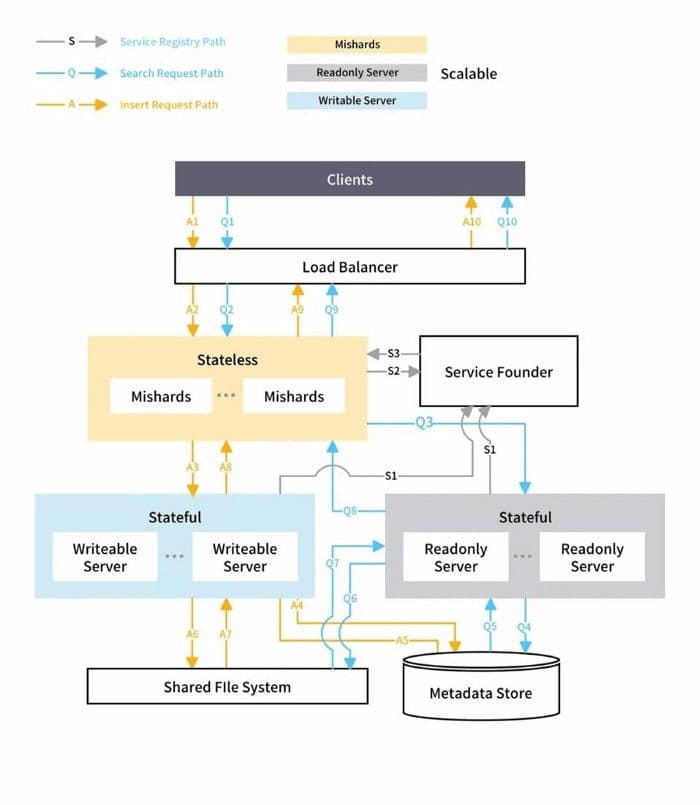 The official documentation provides a clear introduction of Mishards. You can refer to Mishards if you are interested.

In our music recommender system, we deployed one writable node, two read-only nodes, and one Mishards middleware instance in Kubernetes, using Milvus-Helm. After the service had been running stably in a FAT environment for a while, we deployed it in production. It has been stable so far.

As mentioned above, we built Wanyin’s I2I music recommender system using the extracted embeddings of the existing songs. First, we separated the vocal and the BGM (track separation) of a new song uploaded by the user and extracted the BGM embeddings as the feature representation of the song. This also helps sort out cover versions of original songs. Next, we stored these embeddings in Milvus, searched for similar songs based on the songs that the user listened to, and then sorted and rearranged the retrieved songs to generate music recommendations. The implementation process is shown below: 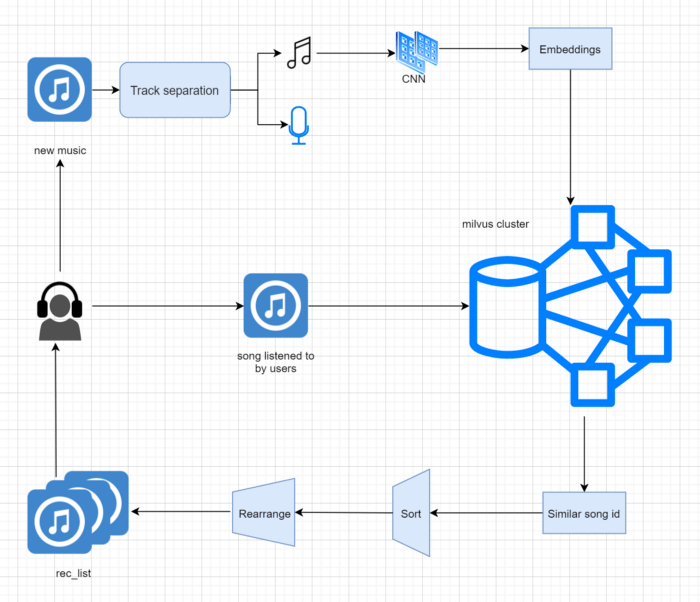 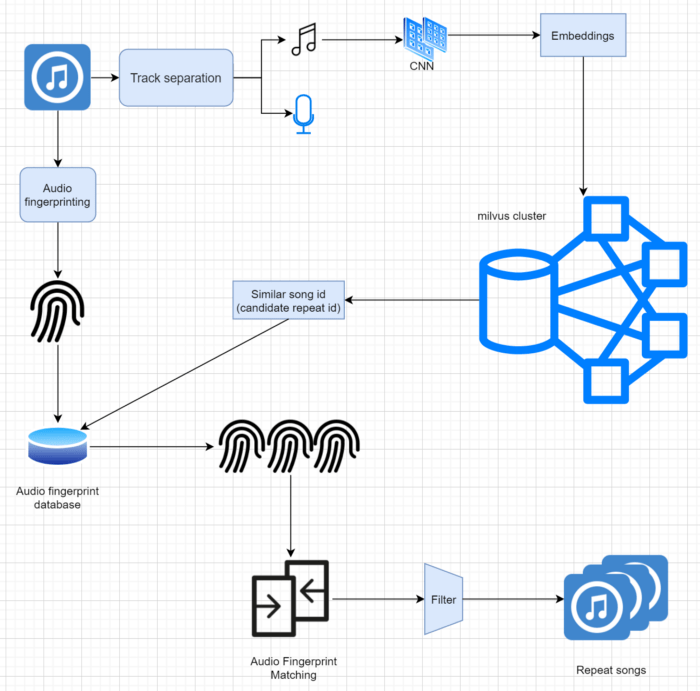 To implement the I2I recommender system for Wanyin’s massive music library, our approach is to extract the embeddings of songs as their feature, recall similar embeddings to the embedding of the target song, and then sort and rearrange the results to generate recommendation lists for the user. To achieve real-time recommendation, we choose Milvus over Faiss as our feature vector similarity search engine, since Milvus proves to be more user-friendly and sophisticated. By the same token, we have also applied Milvus to our duplicate song filter, which improves user experience and efficiency.

You can download Wanyin App 🎶 and try it out. (Note: might not be available on all app stores.)