From Text to Image: Fundamentals of CLIP 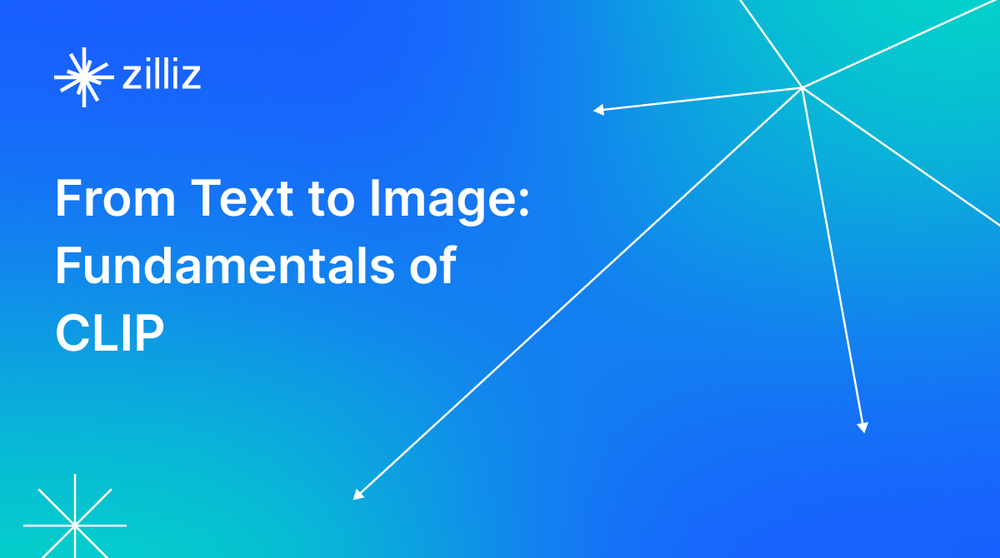 From Text to Image: Fundamentals of CLIP

News flash: Teenagers are turning to TikTok as their favorite search engine, and apparently it works better than you’d think. This is not surprising because traditional search engines do not always find what you want. Especially if you’re a visual person like me, you would probably find images and videos much more intuitive and pleasant than having to crawl through lines of text. Have you ever wondered, though, how machines understand a given text and match it with the images they return?

In this blog series, we will introduce you to retrieving images based on texts, or text-to-image services. Text-to-image has always been an important cross-modal application, and the industry used to rely on roundabout solutions that require a huge amount of user-generated data to group images and find out their semantic relations. That is, until last year, when OpenAI dropped a bomb on the industry with the release of CLIP. OpenAI used an astounding number of 400 million text-image pairs to build CLIP so that it can learn visual concepts based on natural language input. Now, we need to know about some basic knowledge in order to understand the basic components of search algorithms, CLIP, and text-to-image.

Search algorithms, be it traditional or new school, or unimodal or cross-modal, cannot do without the measure of semantic similarity, or rather, the semantic distance between two things. This may sound a bit abstract, so let’s see a few examples. Let’s start with the one-dimensional space of integers, which has probably been engraved in your DNA since elementary school (though probably not phrased as such back then). Now, we have 5 positive integers {1, 5, 6, 8, 10}, tell me, which number is closest to 5? Yes, it’s 6. Congrats on graduating from your childhood. The reason is that 6 has the shortest distance from 5, which is 1. The distance here is the semantic distance between 5 and 6.

Figure 1 A One-Dimensional Space of Integers

Now that you are in machine learning, let’s take a tiny step forward to see how traditional text search is done. If you talk to somehow who’s done text search before, then you will most likely hear TF-IDF a lot. TF refers to term frequency, that is, word frequency. Imagine there is a high-dimensional space with as many dimensions as there are words in a dictionary. If we count the number of occurrences of each word in an article and set this number as the value in the corresponding dimension of this space, we can describe any article as a distribution of sparse vectors on this word vector space (sparse because an article usually covers only a very small fraction of the words in the dictionary). 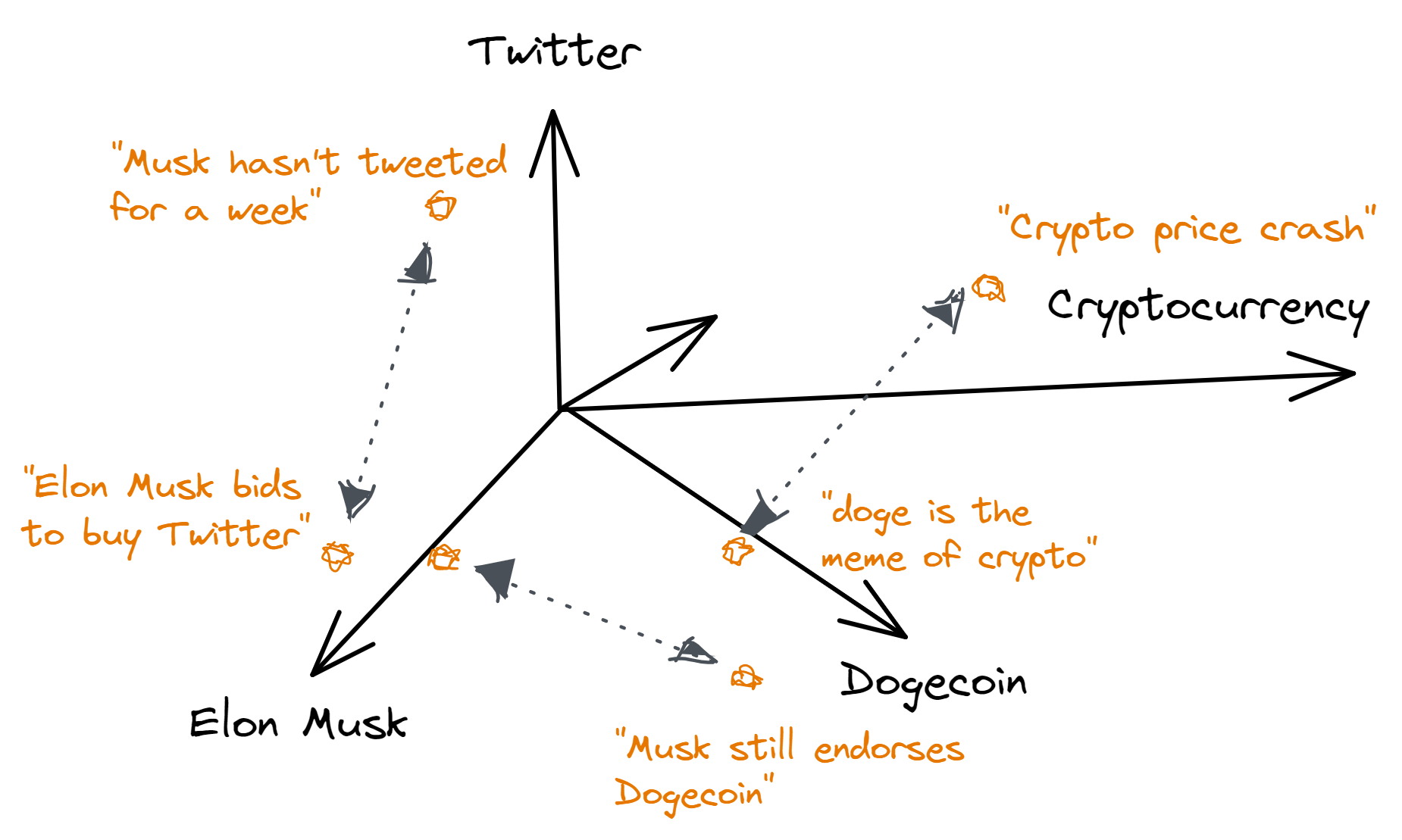 This is a very simple yet practical way of thinking. As shown above, if two articles are similar in their field or content, then the vectors corresponding to these two articles should not be that far apart in the word vector space. If the two articles are identical, then the distance between their word vectors will be 0. In text search, we extend the one-dimensional positive integer space in our first example to a high-dimensional word vector space, but they basically share the same approach: define a space that can be used to describe the semantics of the data and determine the distance between them.

Let’s take another tiny step (yes, you saw this coming). Now that we have texts done, why not map the semantics of images into the word vector space too so that we can achieve text-image cross-modality?

But of course, it’s not that easy. Texts basically are giving their semantics to us for free: they have “words” as a natural semantic unit. Images don’t have that. We can’t use their individual pixels to define their meanings.

The puzzle of vectorizing without natural semantic units used to plague the field of image search and unstructured data in general. Most data types (images, videos, audio, point clouds, etc.) do not come with natural semantic units. It could not be effectively solved until data and computing power became cheap enough and neural networks became popular. Let’s see how this problem is solved by neural networks. 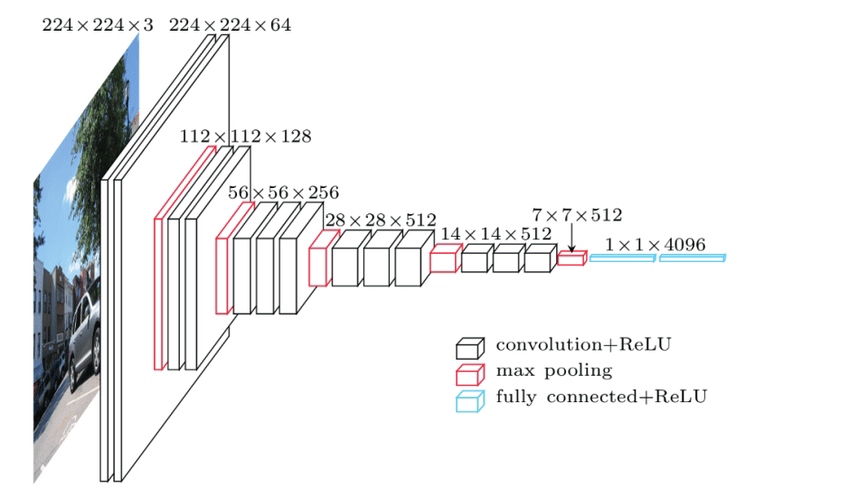 One of the great features of a deep neural network is that it is “deep enough” (You’re welcome). In the figure above, the input on the left is a 224 x 224 image, and the output on the right is a 4096-dimensional vector. From left to right, an image passes through many neural network layers, and the neural network gradually compresses the spatial information on the original picture’s pixels into semantic information. In this process, we can see that the spatial dimension is getting narrower but the semantic dimension is getting longer (not the most accurate statement, but I haven’t found a better way to put it). Essentially, this process is a mapping of the semantics of the image to a real vector space with 4096 dimensions. Compared to the previously described techniques, vectorizing via deep neural networks has several obvious advantages:

What CLIP has done is connect texts and images cross-modally. On the data side, OpenAI has developed a large-scale dataset of text-image pairs, WIT (WebImageText). The model is trained using a contrast learning approach to predict whether images and texts are to be paired. Its design is rather simple: 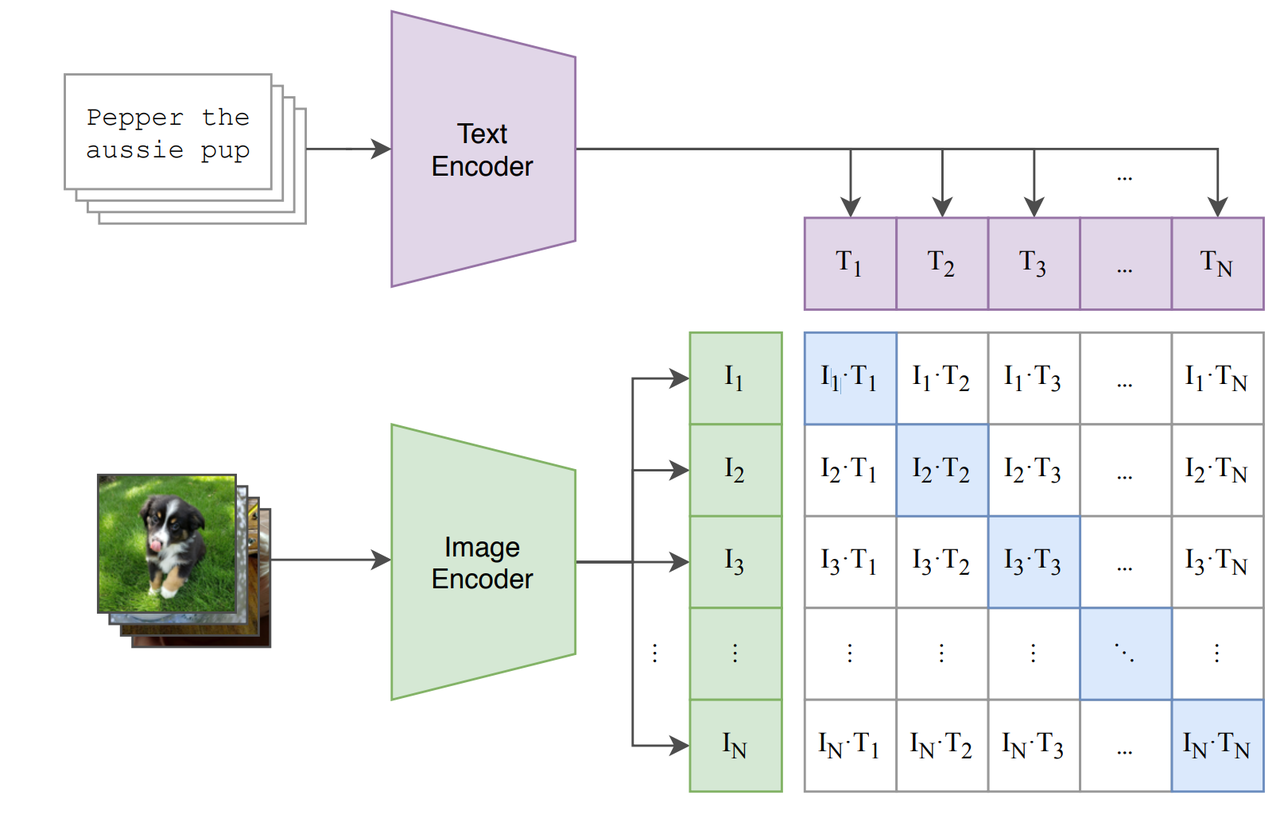 The key here is the second step, which is to project unimodal features from texts and images into a multimodal feature space through the projection layer. This means that we can map the semantics of images and texts into the same high-dimensional space. This semantic space is the bridge that CLIP has in store for text-image cross-modal search. Now we can encode a piece of descriptive text as a vector, find the vectors of images with similar semantics, and then find the original image we want through these image vectors!

Basic components of a text-to-image service

The “to” part is the process that connects requests, the vector database, and the image database. A text from the request side is passed through a model for its vector that will then be compared in the vector database for the topK most similar image vectors. Results are returned once the program locates the original images that correspond to the vectors.

You now know the fundamentals of text-to-image search and CLIP! In the next article, we will practice what we have learned here by building a prototype text-to-image service, in just five minutes!

If you like this article, why not take a look at our project? We appreciate stars, forks, or even just a little click from you. Feel free to hit us with your questions on Slack, too!

“From Text to Image” is a series of blogs that introduce how to use CLIP to construct a large-scale text-to-image service, including: